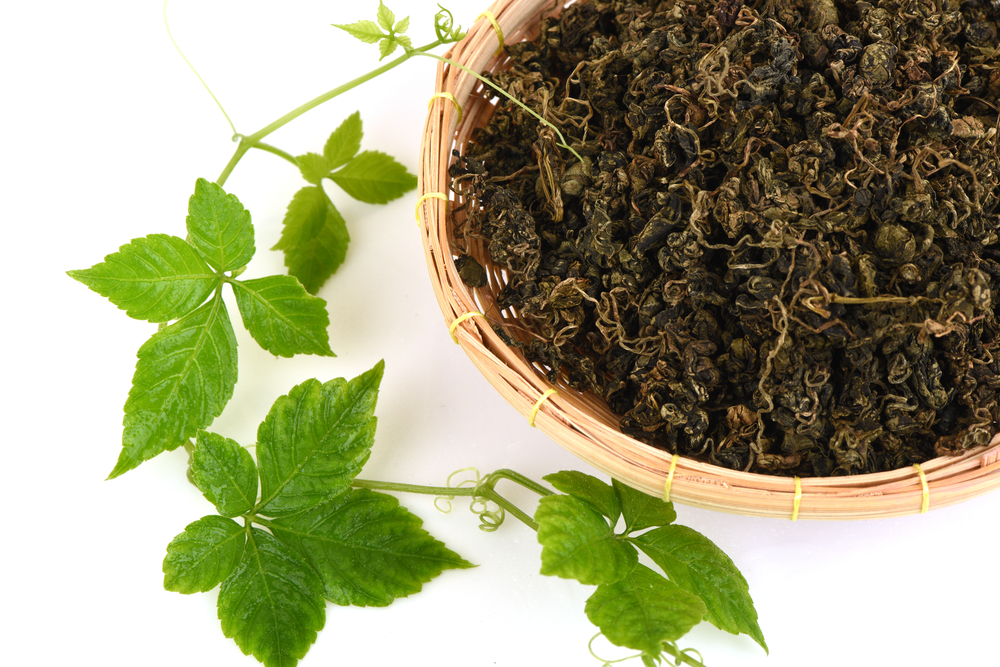 What are the secrets to a long, healthy life?

Scientists, researchers, and medical specialists search for such secrets all over the world. However, ancient cultures have already found their own secrets to good health – and closely guarded them for centuries.

One of these secrets is the little known herb jiaogulan (Gynostemma pentaphyllum), a plant native to China and similar to ginseng.

Also called “herb of immortality,” it was put on the map when regular drinkers of jiaogulan tea in southern China were observed living to unusually long ages – and in great health!

Today, this ancient herbal tea is still used as a powerful remedy and health tonic, drawing from its traditional use by modern herbalists and those of the past.

Like its name, can the herb really grant immortality?

In this day and age, it brings those who enjoy this tea the closest thing to it: excellent health, robust protection against chronic disease, and so much more.

This is evident not only in its longstanding reputation for extending life, but in many studies that have unlocked its proven longevity-granting powers. In fact, jiaogulan has at least 5 confirmed impacts on health that could change your health (and your life!) if you drank the tea every day – while more discoveries are researched every day.

We’ve explored 5 of the very best and well-researched health benefits of jiaogulan, just to show you why you must absolutely give this powerful herbal remedy of old a try for yourself. Jiaogulan over the years has earned itself another nickname besides the herb of immortality: southern ginseng, or cheap ginseng.

Like the true Asian ginseng (Panax ginseng) also reputed to extend life, jiaogulan boosts immunity as a gateway to tonifying health and increasing longevity. Both ginseng and jiaogulan are considered “adaptogens:” plants rich in phytochemicals that protect the body from stress, damage, and disease, while boosting the immune system.

Because ginseng is used extensively but is expensive in price (and is ecologically threatened), our herb of immortality has been and is still used as a cheaper, environmentally aware replacement for ginseng due to its adaptogenic, immune-stimulating effects.

In fact, jiaogulan happens to contain wondrous adaptogenic phytochemicals called ginsenosides, once thought to be present only in ginseng but found aplenty in this Chinese tea as well.

While its effects are nowhere near as researched nor as potent as ginseng, trials pointedly demonstrate similar immune-enhancing effects that bolster health, contribute to longevity, and protect against chronic disease – particularly diabetes.

Ever wanted to try ginseng as a tonic? Instead, try jiaogulan: it has the same phytochemicals and health effects, while being more affordable and environmentally stable. Next to its ginseng comparisons, jiaolugan has also been dubbed the “ginseng for diabetics.”

In addition to being a general immune stimulator and protector against disease, this ancient Chinese herb also has some specific impacts on blood sugars and glucose control. All these effects could be an incredibly useful preventive for diabetics, beyond being a general health tonic.

Jiaogulan’s saponins (including its very own ginseng-like ginsenosides and gypenosides) were observed reducing carbohydrate absorption in trials. They also protect the pancreas, increase the secretion of insulin, and preserve the functions of insulin receptors in the body, which naturally helps increase sensitivity and uptake of insulin – thus reducing high blood sugar counts in diabetics.

Worried about blood sugars and diet? Give jiaogulan a try to put your mind at ease. Even today, it’s used as an adjunct therapy for insulin resistance and diabetes, with strong evidence supporting its use.

Jiaogulan protects health with adaptogenic and immune-boosting properties, though it apparently has some antioxidant action as well.

Before you start thinking of it like acai berry, green tea or even chocolate, think again! Jiaogulan is not exactly a source of antioxidants in and of itself, like these widely popular foods.

Rather, it stimulates the body’s own anti-oxidizing capabilities to work for themselves. That’s right: trials observed an extract of the immortality herb stimulating the body to produce more glutathione amounts, without a single supporting supplement of glutathione needed.

Such effects have far-reaching implications. Damage to DNA, neurons, even heart and skeletal tissue were observed, showing that this ancient tea could protect and even repair the body from oxidative stress and diseases of all kinds.

As it turns out, jiaogulan has a particular affinity to the cardiovascular system. Trying out the herb of immortality could do some amazing favors for your heart, and especially blood pressure.

Studies in vitro show that the Chinese herb encourages the body to produce its own nitric oxide, which dilates blood vessels, assists blood flow, reduces hypertension, and reduces the chance of heart disease.

Try a little jiaogulan tea if you are worried about your heart health – plus, its anti-oxidative activity and other health effects can’t hurt as added benefits! More good news for the heart: saponins in the tea may very well have a cholesterol-reducing effect.

One trial showed a 22% drop in LDL levels (bad cholesterol), while HDL (good cholesterol) remained unchanged. This bodes well for heart health, reducing the chances for hypertension, heart disease, atherosclerosis, and many other connected health problems besides.

Looking for a natural way to manage your cholesterol? Jiaogulan may help.

Beyond lowering cholesterol, this health benefit isn’t the only reason you should give the herb a try for better health.

Jiaogulan also protects your body from stress and disease, heals the heart, combats diabetes – and will get you the closest to immortality you can get!